Medical Supplies for the Solomon Islands 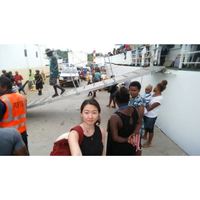 At the end of my first year of medical studies at the University of Queensland, I had the pleasure of being hosted by the Gizo Hospital on Solomon Islands for my observership placement. The town of Gizo is located in the Western Provinces of Solomon Islands, 1 hour away by plane and 27 hours away by ferry from the country’s capital Honiara. With a town population of roughly 8,000 people, the Gizo Hospital also caters upto 70,000 people per year as it is the main referral hospital in the Western provinces and is the second largest hospital in the country. Waiting for the ferry Anjeanette to disembark on a 27-hour ride to Gizo.

I arrived at Gizo after midnight, after enduring the 27-hour ferry ride packed with local travelers heading back home, just in time for the Christmas and New Year’s celebrations. Unlike the pictures of resorts and coral reefs you would find on Google when you type Gizo, the actual town of Gizo was bustling with people and packed with motor boats coming in and out of the market carrying people and their goods. The main parts of the town could be explored in roughly 10 minutes on foot, and I was looking forward to having an off-grid time away from internet, fast-food, and traffic. In early 2016, a psychiatric patient in the old Gizo Hospital accidentally burned down the hospital. Fortunately, there was no casualty and a new hospital was built right away with the support from the Japanese and Taiwanese government to meet the province’s needs. There were only two doctors working at the hospital during my stay due to the holiday season, but it was incredible to watch these doctors efficiently and resourcefully take care of all the admitted and emergency patients in the hospital. A normal day would start at 8:00AM with the ward rounds or in the operating theatre depending on the day of the week and end in the emergency department and outpatient’s clinic. During my placement, there was a dengue fever and a flu outbreak along with the endemic malaria, which allowed me to practice my history taking and venipuncture skills daily. Due to severe lack of medical supplies at the hospital, the hospital staff were delighted to receive medical supplies provided by the Rotary Club of Toowong, TIME UQ, and Paralogic just in time for Christmas. Opening up the donated medical supplies

Out of all the patient cases I witnessed during my placement, it was shocking to see the high prevalence and incidence of diabetic patients in real life. Solomon Island’s main diet consists of high -starch food including cassava, sweet potato, and taro. Combined with the culture of chewing betel nut, walking barefoot, and not exercising regularly, the number of admitted diabetic foot ulcer patients was staggering. The emergency doctor that I was following was a registrar from St. Vincent’s hospital in Sydney and even she claimed that one of the patients who we saw together was the worst case of diabetic foot ulcer she has ever seen. Fortunately, the patient’s sepsis became stable enough for the patient to be transferred to the National Referral Hospital in Honiara for a below-knee amputation. Diabetic foot ulcer with sepsis during my placement

Solomon Islands was also a great place to explore as the diving sites and reefs are one of the world’s best. During the weekends and especially during New Years, I was able to spend time in remote villages where they held New Year celebrations. People came in by boats, dancing and singing, and were very welcoming to visitors like me.

Assisting OR nurses set up for a tubal ligation surgery.

Overall, this experience has been an unforgettable, rewarding time to not only practice my clinical skills that I learned in first year but also to step into another culture and appreciate their way of life. I was able to conclude my placement with a greater sense of determination and motivation as I enter my second year in medical school to become a doctor who is caring and highly skilled in what I do. I would like to thank the Rotary Club of Toowong for providing the Feros grant that has enabled me to embark on this medical placement and donate medical supplies to the hospital. I would also like to thank TIME UQ and Paralogic who have generously donated medical supplies as well. I would like to thank Solomon Air for offering free medical luggage allowance, Gizo Hospital staff for their hospitality, and last not but least I thank the UQ Faculty of Medicine for supporting my observership placement.